Before describing today’s practice, some background. I see that in my last post, from a week ago, I was congratulating myself on handling M’s tantrum by telling her to go to her room until she calmed down. Well, the very next day, she was getting frustrated and acting uncooperative, and she said, “Aren’t you going to send me to my room?” “No,” I said (because it was late and because I was onto her game).

So the whole “go to your room until you’re ready to practice” might not be sustainable.

Then a few days ago, I did something a little insane. M was being incredibly hostile and contrary, resisting all my instructions. We were working on Suzuki’s Allegro, I think, and she kept making the same mistake. I told her to slow down; she didn’t want to. I said she needed to play the section with no mistakes. (It was a part she knows.) She started to play at her too-fast tempo, and I said, “That’s too fast.” “No it’s not,” she replied.

Instead of arguing, I said, “Okay. I think that’s too fast. But you can play that fast if you want. If you make a mistake at that tempo, though, I’m going to charge you a dollar.”

Smoldering gaze. She plays at the too-fast tempo. She makes a mistake, stops, looks at me, and starts bawling.  “Now you’re going to charge me a dollar. That’s not fair!”

Was it fair? Probably not. But I explained two things to her. First, I said that she had made a choice: Play at the tempo of her choosing, and risk losing a dollar if she made a mistake, or play at a slower tempo set by me, with no risk of losing a dollar. She chose to take the risk. Second, I explained that I would give her the chance to earn the dollar back during another lesson, and I was sure she could. She eventually calmed down, and we practiced some more.

Then we started in on the first four notes: an A in the bass, followed by A-G#-A (hammer-on). She didn’t do a great job paying attention as she got ready, so she was playing wrong notes because of wrong hand placement. I did a little Karate Kid action (drop the jacket; pick it up; hang it up; drop it; pick it up; etc.), asking her to drop her hands, then prepare; drop hands, prepare; etc. She played along and was pretty cheerful.

Then I set her the goal of playing those four notes correctly 10 times in a row. She managed it, but it took probably 15 minutes, because she’d do a couple right, then muff it by not paying attention. Still, she stayed positive, partly because she was just in a good mood, but partly (I think) because she could see that this was a clearly achievable task — she did achieve it, and it was only four notes!

Once she did that part right ten times in a row, we moved to the next few notes, which are a little harder (there’s a dotted eight and sixteenth, and you have to use the a finger). And here, I asked her to get it right 10 times, but not necessarily in a row. She asked to earn money for the repetitions, and I agreed, as a way for her to earn back the $1 I had charged her a few days ago. We decided on 10 cents per repetition for the first six, then we renegotiated, and she had to do the last 4 in a row correct to get 10 cents for each of them; otherwise, each would be worth 1 cent. She earned her dollar back.

From start to finish (including reading Practiceopedia), we spent almost an hour, and we practiced a total of one bar of music. But M was cheerful and cooperative, and we did a heck of a job with that one bar. Every day can’t be like this, but it was a pretty good day overall. She wrote this in her Breakthrough Diary (which we have not regularly been maintaining): 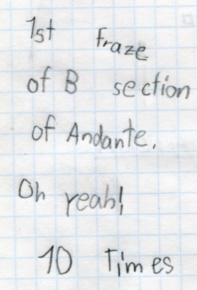