Lately, I’ve become obsessed with mental practice. This began as an interest in mindfulness and has expanded to an interest in memorization. (Analysis can, I think, be set aside for now.) M and I worked on both in today’s lesson.

My recent quest to learn more music theory led me to a gimmicky but very effective system for memorizing music-theory facts: the Vaughn Cube for Music Theory, a system described on an instructional DVD (the five free previews give a good overview of the system).

Basically, Vaughn (a memory guy, not a music guy) uses the ancient “memory palace” technique to locate musical facts (the circle of fifths; key signatures; etc.) within a room. The first level of the music cube/memory palace is extremely kid-friendly: you place animals around the room to represent keys. So I spent time in tonight’s lesson introducing M to the locations of the animals. Mostly, this was just fun — I stood behind her, and moved her arms to point at different walls and corners, then asked her to name the animal I was point her arms to. At the end of our lesson, I let her do the same to me, which was a great reward for her.

For what it’s worth, the cube is arranged like this: 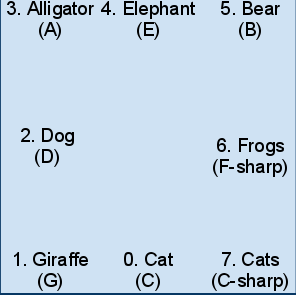 I’ve been trying to help M develop her ability to focus on what she’s doing, as she’s doing it. Because as she starts playing longer pieces, mindfulness becomes more and more important. Without it, M easily gets lost within a piece, forgetting what comes next and disregarding things like tempo, dynamics, articulation, etc.

Today, we tried out a new approach to playing With Steady Hands: I asked M to imagine (hear in her head, and play air guitar if she wanted) two measures while I tapped out a beat on my guitar top, then play two measures, then imagine, then play, etc. for the first half of the song.  I’m not sure how well it worked, but I think I’ll try it again.

We also tried a very concrete approach to “imaging ahead” (a Klickstein phrase) in our sight-reading practice. I’ve noticed for a while that, quite naturally, she usually has problems playing fluidly from one line to the next: the effort of shifting her eyes from the end of one line to the beginning of the next sucks up so much attention that she hesitates and loses the beat of the piece.

So we took several pieces that she already knows and played the last measure of one line and the first measure of the next. I instructed her to look ahead during that last measure so she could see what was coming next. These early songs all have half or whole notes at the end of a line, so I pointed out that the longer notes gave her plenty of time after plucking a note to look ahead to the next line. This worked pretty well, and I definitely plan to build on it.